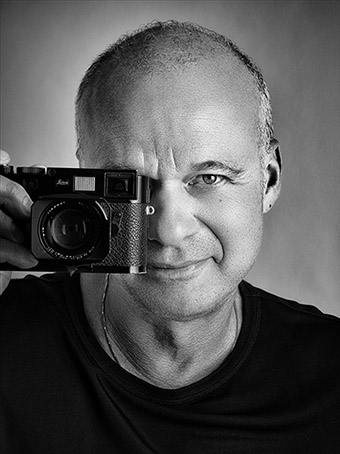 Gérard Musy was born in 1959 in La Chaux-de-Fonds, Switzerland.

As early as 1983, and still a student, Gérard Musy began to photograph nightlife in iconic cities, including New York, Los Angeles, London, Paris and Geneva. With Lamées, he photographed this emerging desire for festivity, where nightclubs are a new space for sensual and playful pleasures. He captured from very close up this nocturnal world of transgression, not only as an insider but also an actor in the scene. Musy navigated the arty nocturnal performances of the East Village in New York and of the Danceteria in 1983, the eccentric sex-post-punk of the Batcave in London – prefiguring the fetish / S&M scene towards the end of the same decade – and the Parisian trendy nights at the Palace where the Nouveaux Créateurs rediscover the sexualised body.

These were brilliant, glowing, dancing, fun and carefree years where the pleasure of seeing and being seen was crucial. His work on this theme was recognised by the Swiss federal award for Applied Arts in 1987, exhibited at the Musée de l’Elysée in1991 and published by Ester Woerdehoff (Benetli editions) in 1994.

In 1985, Musy was present at the early fetish S&M evenings at the Maîtresse Club in London’s Soho district. A massive societal movement thereafter swept the world for over a decade. Gérard is the only photographer to have followed this movement from its genesis until its apotheosis in The Rubber Ball in London, as in the grandest clubs of New York and Paris.

In 1986 he graduated with an Art History degree from the University of Geneva, for which he produced a research paper on the photographer Robert Frank who he met on several occasions. From him, Gérard Musy received the most rewarding of compliments, when his work was compared to that of Italian filmmaker Antonioni.

In 1986, Musy was the first fashion photographer to be granted exclusive access to the changing rooms of fashion shows. In 1988 he published his first images of backstage as a two-page spread in the trendiest magazine in New York: Splash. He captures the frenetic life in the space between intimacy and representation.

From 1987 to 1991 Musy lived in New York. He innovated in fashion photography by naturally investigating life in the non-pose: vivaciousness after the over-sized poses of Ritz and Weber. In sensual black and white or in radiant colour, he always seeks a shining and radiant energy. He is always in movement, just like the model: a double game. A game that continues with the digital revolution. Musy photographed for ground-breaking international fashion magazines including Details, Pure, Yummy, Massiv, Exit, Skin Two… and for references like Vanity Fair, Harper’s Bazaar, Vogue Hommes, Glamour, Jalouse, Joyce, Sportswear International, etc.

In the 1990s, while still capturing nightlife, he began to explore the body, this time in its intimacy, which became the subject and photographic predilection of the end of the millennium. With Lustres, the bodies are initially captured as “intimate fetish”, then exhibited in S&M mode, to end up “selfied”. Gérard captures himself in a world where there is no longer a frontier between intimate and exterior.

This work was awarded a second time by the Swiss federal award for Applied Arts in 1995, and published under the name of Lustre Fetish Nights by LLéditions in 2006, with a preface by William Ewing, director of the Musée de l’Elysée. This work was also exhibited in the form of a projection at the Musée de l’Elysée in 2007 and presented at the Darkside exhibition at the Fotomuseum of Winterthur in 2008.

Since 1991, Gérard has lived in Paris. As an art photographer, his creative work is totally coherent, currently embracing six major themes where everything corresponds and resonates.

From 1996, Musy has approached two more contemplative themes: Leaves and Lontano/Lejano. The former is a journey into natural vegetation, and the latter a voyage into the Mediterranean space and into a time of remembrance. Together, the four themes Lustres, Lamée, Lontano, and Leaves form a tetralogy: LLLL. The theme of the night may seem superficial, but for Gérard Musy, all these images are the representation of a photographic reflection. He extends and declines notions already present in the two themes of the night (listed ad-hoc and here without detail): the energy of life, collision between formal elements, chance, fantasy, dreams, transgression/traverse/ transcendence, and finally the combined exploration of the senses, bodies, space and time, leading to an empathetic fusion. Euphoria.

Finally, the photographed subject is of lesser importance, since the quest for symbiosis is similar in trendy nights (Lamées), a fetishist/erotic night (Lustre), a voyage into nature (Leaves), travel in time (Lontano), the whirlwind of roundabouts (Kaleidoscope), or a sensorial S&M exploration (Beyond).